An action in the public space of the old Town of Korčula, grey )( area

The artwork consists of a symbolic action, an invitation extended to permanent and temporary inhabitants of Korčula to turn off their air conditioners to test Korčula’s ventilation system, a unique feature of its city planning.

Korčula is full of details. The passage of time inscribes new layers - renaissance and baroque left details in the stone, mouldings, heads, rosettes, balconies, coats of arms. We can recognise where windows and doors used to be, delineated by frames made of stone. Recent years have brought a forest of power lines. The old ones are replaced with the new, but the iron construction remains. Satellite dishes and the mounts of those which have been removed remain as well, and so do the junction boxes. Clotheslines, private rooms, apartments for rent and souvenir shop signs, lighting. Between the rows of houses, in kanižele, narrow passages designed for drainage, air ducts and outdoor units of air conditioners can be found as well. During the summer, people, group tours, fill the leftover emptiness. The visitors come and go, roam, take photos.

The everyday life of a town devoid of empty space has been leaving me with the same question time and time again - why adding? Why intervene in such a public space, even if the intervention is an artwork or its nature is temporary? Everything seemed excessive. Instead of making something, I have decided to subtract. 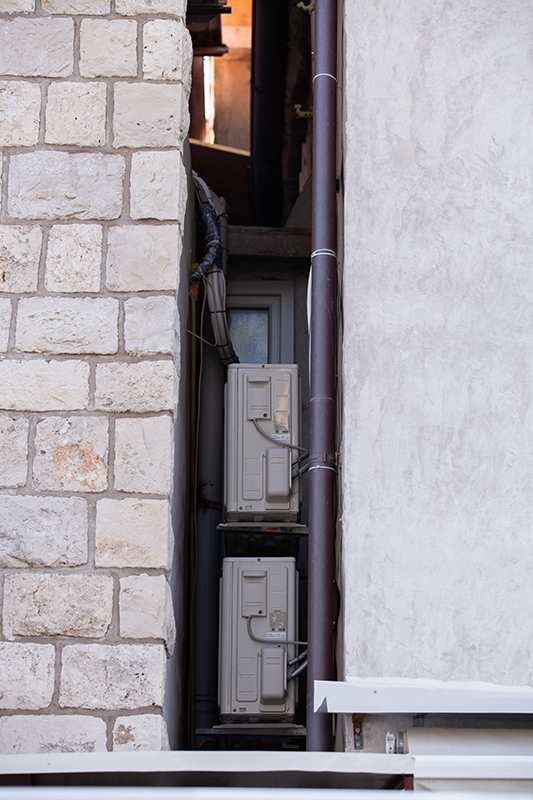 The urbanism of the Town of Korčula was designed in accordance with the wind rose. If we take a look at its map, we will see that the streets are positioned in a fish bone pattern. In practice, this means that wind blows in every street . This natural air conditioning makes the streets pleasant during the summer in spite of the heat. However, subsequent interventions into the architecture of Korčula and the warm air of air conditioners have impaired the air circulation. The wind cannot find its way to every corner.

Accordingly, I am developing an idea about an action, an invitation to Korčula’s inhabitants and visitors to turn off their air conditioners for a day. The elimination of the warm air propelled out of the outdoor units of air conditioners will enable the wind to fill the space. We will prove whether the town functions as a cooling system. We will put wet sheets on our windows and use the old cooling method. 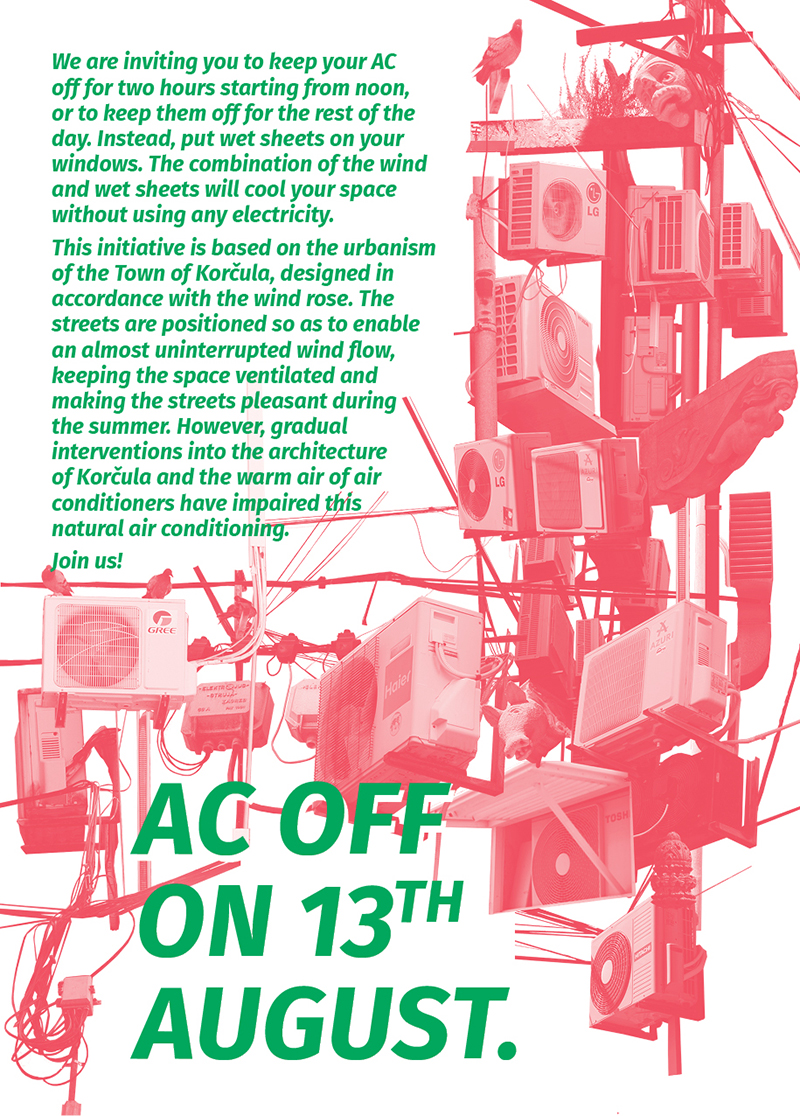 A couple of days before the action, we are handing out leaflets and putting up posters. Radio station Radio Korčula is recording a jingle about the action and broadcasting it. The leaflets are an invitation to participate in the action, while the process of handing them out serves as an opportunity for a conversation. In one such conversation, Mrs B. is sitting in front of her doorstep and counting the air conditioners. About thirty enter her field of vision. She doesn’t use them, but she hears them humming all the time. She can’t leave her yard without feeling the gust of warm air from the air conditioner of the neighbouring catering establishment. The air conditioner is positioned right at the passage. 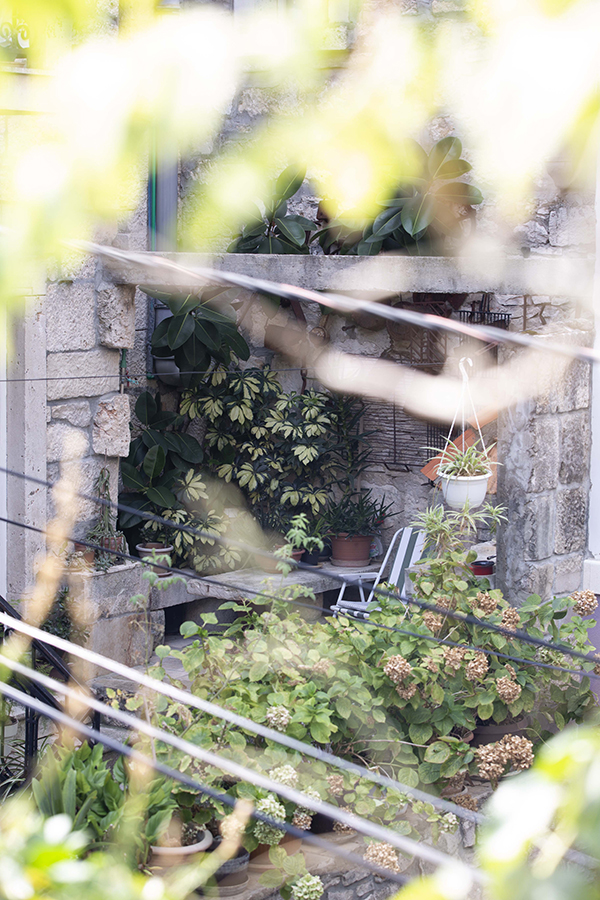 The reactions and conversations are different. At the hairdresser’s they claim the number of customers would dwindle, no one would enter a small shop selling clothes if it wasn’t air-conditioned, the lack of air conditioning in restaurant kitchens is not to be mentioned. - We are no longer in the Middle Ages, air conditioners are a necessity - they say. It is easy to talk to the inhabitants. They talk about the singularity of Korčula happily, mentioning the old means of cooling the town and the theory of making mouldings serving this purpose. For the inhabitants, the issue comes down to tourists. They say it is impossible to expect they would suffer any inconvenience, so hosts rarely venture to ask them to participate.

I envision the action on the symbolic level, trying to avoid the interpretation about personal responsibility when faced with ecological challenges. This is why I am veering the conversation in the direction of urbanism and a systematic consideration of the environment. Degrowth is based on departing from the idea of growth as the only possible scenario. Infinite growth, the basic tenet of capitalism, can be delineated in the way a tourist season is valued. It is considered a success as long as the number of overnight stays is growing. That way, the foreign tourist becomes the measure of everything, from restaurant prices to interior design, reflection about the landscape, domesticating the coast. Interior design standards are based on the requirements of western organisations, hungry for a controlled environment , the idea of prosperity. Private rooms and apartments for rent must have air conditioners in order to meet the basic standards of tourism and enter the market. The regulations are the same, regardless of the uniqueness of the environment surrounding it, regardless of the possibility to position the outdoor units in a way that wouldn’t affect the neighbours or the public space.

This is the line of reasoning I am following when thinking about degrowth: tourism in line with infrastructure, consumption in line with city planning, corresponding ventilation systems. I am thinking about a joint action, gathering both the inhabitants and tourists, demanding some kind of mutual solidarity, performing the same simple action. Degrowth I have in mind encompasses art as well - the one based on elimination instead of material production. I find value in the situation.

Post scriptum: On the day of the action - rain, considerably lower temperature. No one turns their air conditioner on, but there is no need for wet sheets on windows. I can’t get the picture I wished for. However, the artwork exists on the symbolic level, in the idea that the possibility of natural air conditioning has stayed with those who found themselves at Korčula during those days, with whom we talked, who heard the jingle on the radio… 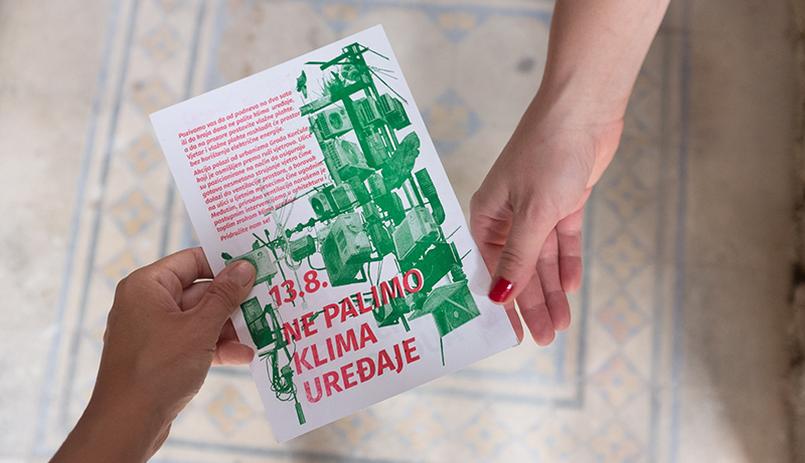